How ‘new power’ is driving journalism in the digital age

A new book on so-called 'new power' can help us understand transformations in journalism like increased collaboration and use of digital technologies for investigative journalism.

This article first appeared in The Conversation (Australia and Indonesia) in April 2018.

According to the book’s authors, Jeremy Heimans and Henry Timms, the differences between “old power” of the 20th century and “new power” of the 21st century are the approaches to governance, competition, sharing of information, expertise, and loyalty and affiliation. 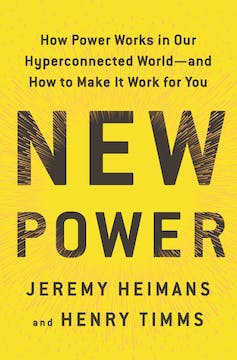 Heimans and Timms argue that new power values have moved away from formal governance structures to informal (or networked) governance, allowing individuals to opt-in.

In the new power paradigm, collaboration and crowd sharing are valued. Transparency and a do-it-yourself culture are favoured over secrecy and relying on experts. Affiliation to groups is not reliant on long-term loyalty; rather, short-term affiliations can lead to greater public participation.

New Power is filled with riveting examples of the types of power models that underpin global success stories in different fields. Examples examined in the book include Uber, Facebook, Reddit and social and political movements such as #BlackLivesMatter and #MeToo. New power is also used to explain grim success stories, such as the spread of terror network, ISIS.

Heimans and Timms know a bit about new power. Heimans was a co-founder of Australia’s political action movement GetUp! and now runs the New York based Purpose, an incubator for mass movements around the world. Timms is CEO of New York’s 92nd Street Y, a Hebrew association that creates programs and movements to foster learning and civic engagement.

Some of these qualities can help us understand transformations in journalism, particularly investigative reporting. Think of the Panama and Paradise papers. In these examples, hundreds of journalists from several countries formed a virtual reporting community. Using digital technologies to analyse leaked data, the reporters exposed how the world’s privileged used off-shore tax havens to cut their tax bills, or for more nefarious purposes.

This new model of journalism collaboration – rather than the old model of newsroom competition, where journalists fervently compete to be first with the story – was key to the success of telling this global story about economic unfairness. As with new power, digital tools were integral, allowing journalists across the globe to share and analyse very large amounts of data.

Read more: Paradise Papers yet another example of the power of collaboration in investigative journalism

In their book, Heimans and Timms argue the flow of power in society has transformed from the old norm of a top-down approach to a new norm of power that moves sideways or bottom-up. Take, for example, the global viral spread of movements such as Occupy, a protest movement against social and economic inequality. Its success is typical of a new power paradigm characterised by increased personal agency, a flattened hierarchy and the participation of the crowd.

While Heimans and Timms’ book is a broad and articulate account of new power, others have also considered this notion in various ways. Spanish sociologist Manuel Castells’ concept of the network society

📷 also realised that top-down power, such as that of institutions, would decrease with the rise of digital connectivity. It allowed for power to reside in the many (the crowd) rather than the few, which Castells described as the “power of flows” rather than “flows of power”.

Academics Lance Bennett and Alexandra Segerberg, in their groundbreaking 2013 book The Logic of Connective Action, developed a comprehensive model for understanding how mass political mobilisations have shifted from traditional collective action to new forms of connective action. With the latter, digital technologies and social media are essential to the success of mass movements.

Read more: More than 'slacktivism': we dismiss the power of politics online at our peril

Just as Heimans and Timms explore hybrid forms of old and new power, Bennett and Segerberg also showed that political protests could be a mix of old and new forms of action in the digital age. The hybrid form requires coordination of action by existing organisations, yet also relies on digital media to engage the crowd.

We can apply the hybrid model to modern journalism: one example is The Conversation. It is a global network built of a flat structure and collaboration between journalists and academics, using digital technologies to connect the two.

With this model, it fills gaps in the coverage of science, health, arts and culture and explanatory journalism that traditional outlets cannot maintain, because of lost advertising revenues that have led to newsroom cost-cutting.

Read more: How investigative journalists are using social media to uncover the truth

Recent research shows Bennett and Segerberg’s hybrid model is adaptable. I argue it is highly useful for thinking about large-scale investigative journalism. Take the recent collaboration between America’s not-for-profit ProPublica with various news outlets that called on the American people to report their barriers to voting in the 2016 USA election. Here, the professional newsroom coordinated the reporting, but equally the crowd and digital technologies were needed to gather the information.

Other commonalities exist between the organisation of mass public protests and collaborative investigative reporting. Both produce record-breaking mobilisations and show flexibility in terms of political targets and issues. They also use shared content to relay personal perspectives (as memes or local story angles), and share open source software development.

At the forefront of Bennett and Segerberg’s research is the global problem of economic fairness. This theme is also central in many global collaborative investigative stories such as the Paradise papers.

Global investigative journalism not only critiques power, it is powerful. Economics Professor Gabriel Zucman argues an estimated $8.7 trillion, 11.5% of the world’s GDP, is held in offshore accounts.

Reportage such as the Paradise Papers provides a new means for focusing global public attention on global economic injustices for politicians’ actions. Economic inequality harms everyday citizens, damages confidence in democracy, and is costly to governments.

The World Economic Forum warned the 2016 Brexit vote and Donald Trump’s election were, in part, spurred by voters’ reactions to income inequality. It predicts global inequality will rise and shape world developments over the next decade.

If, on the public’s behalf, new power enables journalists to challenge this unfairness, than no wonder it is the phrase on everyone’s lips.

She'll be right: why conservative voters fail to see gender as an obstacle to political success

Explainer: what is public interest journalism?